Influences of The Cranberries and Dolores O’Riordan’s legacy

The Cranberries were a highly relevant mid-nineties alternative rock band from Ireland. In this graphic we will review some of the band’s influences: 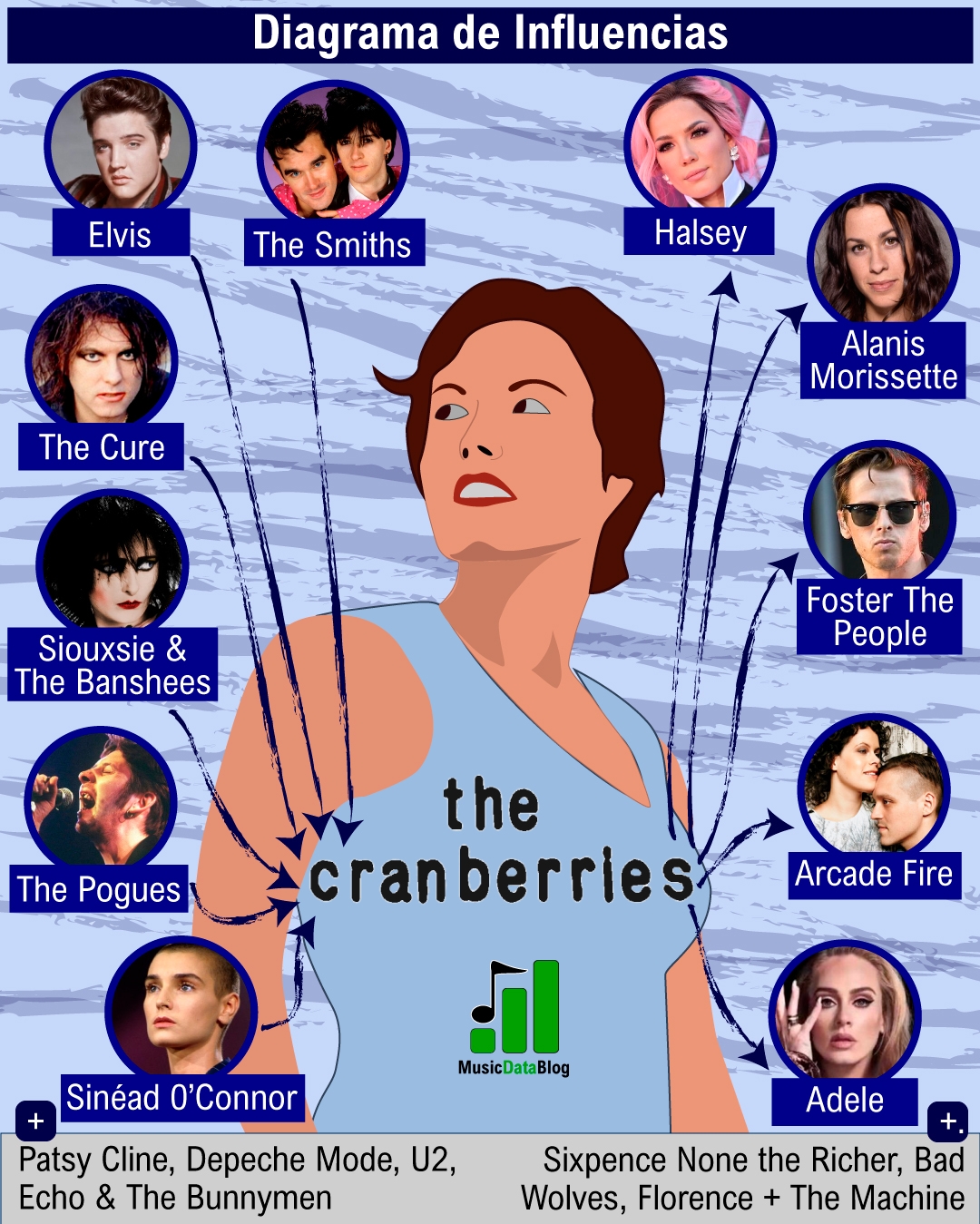 Fronted by lead singer Dolores O’Riordan, The Cranberries were a band formed in Limerick, Ireland. Their main musical influences come from Shoegaze and Alternative Rock, with acts like The Cure, The Smiths and Siouxsie & The Banshees as clear referents. Other artists, such as singer Patsy Cline, Duran Duran and Sinéad O’Connor have also been associated with the band.

Dolores O’Riordan’s powerful voice was one of the signature elements of the band. The Cranberries, and especially Dolores, were a crucial influence on female singers that came after them, such as Alanis Morissette, Adele and Florence + The Machine. Also, alternative rock bands from the 2000’s, like Arcade Fire, Foster the People and Wolf Alice, were influenced by this Irish band.

Which were The Cranberries influences?

The Smiths: One the most important 80’s rock music influences of The Cranberries. The Cranberries had The Smiths as a clear role model, according to comments from guitarist Noel Hogan. Johnny Marr’s particular guitar playing style with The Smiths, capable of creating hypnotic rhythms and pop melodies, was key to the development of The Cranberries music style. In later years, Dolores O’Riordan formed the project D.A.R.K. alongside The Smith’s bass player Andy Rourke.

The Cure: Another group that were admired by The Cranberries was The Cure. The band fronted by singer/guitarist Robert Smith is certainly an influential act, key to defining the sound of goth rock, alternative and shoegaze. The Cure’s music often recreates textures with delay and reverb guitars, which define a sonic template for dark and obscure music styles. This kind of sound can be heard especially on The Cranberries first two albums, Everybody Else is Doing it so Why Can’t We (1993) and No Need to Argue (1994).

According to guitarist Noel Hogan and drummer Fergal Lawler, the compilation album from The Cure, Staring At The Sea 1978-1986, was an introduction for them to other popular acts, such as Siouxsie and The Banshees, Echo and The Bunnymen, New Order and Joy Division. These punk elements are present most notably on The Cranberries third album, To The Faithful Departed, with tracks such as Salvation, Forever Yellow Skies and I Just Shot John Lennon.

Sinéad O’Connor: Even though they were antagonists at some point, Dolores O’Riordan was also influenced by Sinéad O’Connor: Her singing style pre-dated the induction of The Cranberries, who at the beginning of their career covered O’Connor’s song Troy. Afterwards, because of press comparisons, the two singers became less than friends. It was reported, prior to O’Riordan’s death on January 15th, 2018, that the two had made amends.

We can name as The Cranberries influences singers that Dolores O’Riordan use to hear when she was a child, such as Elvis Presley and Frank Sinatra. She also mentioned she liked singer Patsy Cline, who usually covered Willie Nelson`s Crazy, a song that was also played live by The Cranberries.

Other bands that influenced The Cranberries are R.E.M. Duran Duran, Depeche Mode and U2.

Which artists were influenced by The Cranberries?

Adele: R&B pop singer Adele was one of the first artists to honor Dolores O’Riordan upon hearing the news of her death. Adele especially mentioned the song Linger as one of her favorites because it reminded her of how the band broke into the United States. Also, she is very fond of the dramatic lyric style of that particular song. This “blue” mood is present in many of Adele’s tracks, notably the hits Someone Like You and Set Fire to the Rain.

Arcade Fire: Another act that paid tribute to Dolores O’Riordan (covering Linger, actually) was Arcade Fire, whose music references The Cranberries on many occasions. Perhaps the most evident influences are on their album Funeral (2004): the orchestral vocal tracks, the folky style musical arrangements and their baroque pop vibe. Songs like Rebellion (Lies), In the Backseat and the Neighborhood track series, from the previously mentioned album, are good examples of this.

Halsey: One of the most acknowledged pop artists nowadays, Halsey, explained that she used to listen to The Cranberries frequently when she was a child. The unconventional singing style of the Irish singer taught her how to use her own voice.  According to Halsey, Dolores O’Riordan was a “badass woman” in the world of rock n’ roll.

Foster The People: Mark Foster, frontman of Foster The People, credited Dolores O’Riordan as an influence when thinking about lyrics.  The singer stated that The Cranberries songs taught him how to use her masculine and feminine energy.

Other artists influenced by The Cranberries are alternative metal band Bad Wolves, Sixpence None the Ritcher and Florence + The Machine.