In this infographic we will review some of Weezer’s influences, alongside some facts about Rivers Cuomo’s favorite artists: 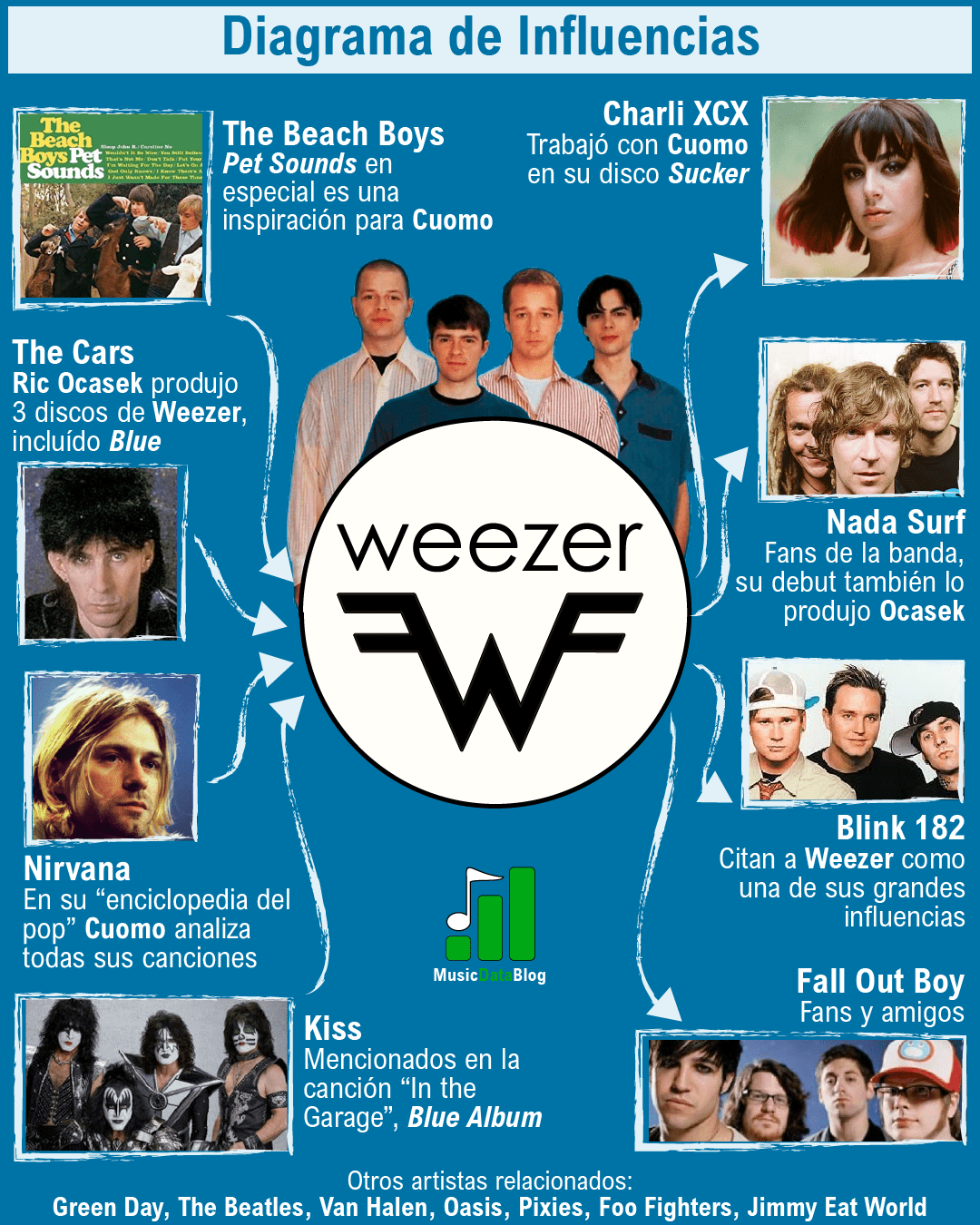 2021 will see the release of another (yes, yet another) Weezer album: Van Weezer. In addition, the album Ok Human was a surprise release in early 2021. Although the band’s latest productions are not among their most important ones, the band’s influences are something worthy to be analyzed. There are in fact some well-known fans of the self-titled debut (nicknamed Blue Album, from 1994), Pinkerton (1996) and Make Believe (2005).

One of the first bands that come to mind when it comes to talking about Weezer’s influences is the Beach Boys. That pop sound, those witty melodies and catchy choruses. Specifically, the great album Pet Sounds is a favorite of Weezer singer-songwriter Rivers Cuomo, who has cited them as a direct reference on many occasions. Also, we can especially note this influence of the Beach Boys in the aforementioned orchestral Weezer album, Ok Human.

On the other hand, the pop influence also comes from the side of the new wave band The Cars, fronted by the late Ric Ocasek. In fact, it was none other than him who produced Weezer’s debut album, the Blue Album. Furthermore, he also produced the Green Album (also titled Weezer, from 2001) and the unfairly underrated 2014’s Everything Will be Alright in the End.

Rivers Cuomo is known to be very studious and somewhat obsessive about his own composing methods. Being this methodical led him to develop an “Encyclopedia of Pop” to analyze and determine how other bands composed their hits. In this “secret” document, he lists songs from Green Day, Oasis and especially Nirvana, which is one of Weezer´s main influences.

Being a glam and hard rock influence on Weezer, Kiss are mentioned in the lyrics of the song In the Garage, from Weezer’s debut album. Elements of pompous heavy with pop airs appear in various songs of the band, such as the track Back to the Shack from 2014 or more recently The End of the Game, from the recent album Van Weezer, which is obviously inspired by metal acts such as Van Halen and Kiss.

Bands and artists influenced by Weezer

One of the world’s best known new pop stars, Charli XCX, has cited the song Beverly Hills from the Weezer album Make Believe as her favorite. Additionally, Rivers Cuomo has collaborated on the singer’s second album, Sucker (2014), with Charly celebrating the pop sensibility of the Weezer frontman.

The band Nada Surf has a similar sound -at least in principle- to Weezer. Their melancholic songs, with powerful emo-pop choruses, have served them to gain some relevance towards the latter half of the nineties and early 2000s. Also, their 1996 debut High/Low was produced by Ric Ocasek.

Among the many band companions that Weezer has had, a strong one is with Blink 182. In this regard, the bassist of the punk-pop trio, Mark Hoppus has related the honor of sharing a concert with one of his influences. Oddly enough, Weezer were the ones who opened for Blink 182 on their tour together, as the latter were the headlining act.

Last but not least, we will refer to other tour partners of Weezer: Fall Out Boy. Speaking of the postponed Hella Mega Tour, their bassist and main lyricist, Pete Wentz, was thrilled to be able to share the stage with two of his favorite bands: Green Day and Weezer. It is worth noting that Wentz has appeared in the video for Weezer Can’t knock the Hustle, from the 2019 Black Album.