9 R.E.M. influences in one diagram

In this post will review some influences of R.E.M., which are fundamental for many alternative rock bands that achieved mainstream success during the nineties decade. 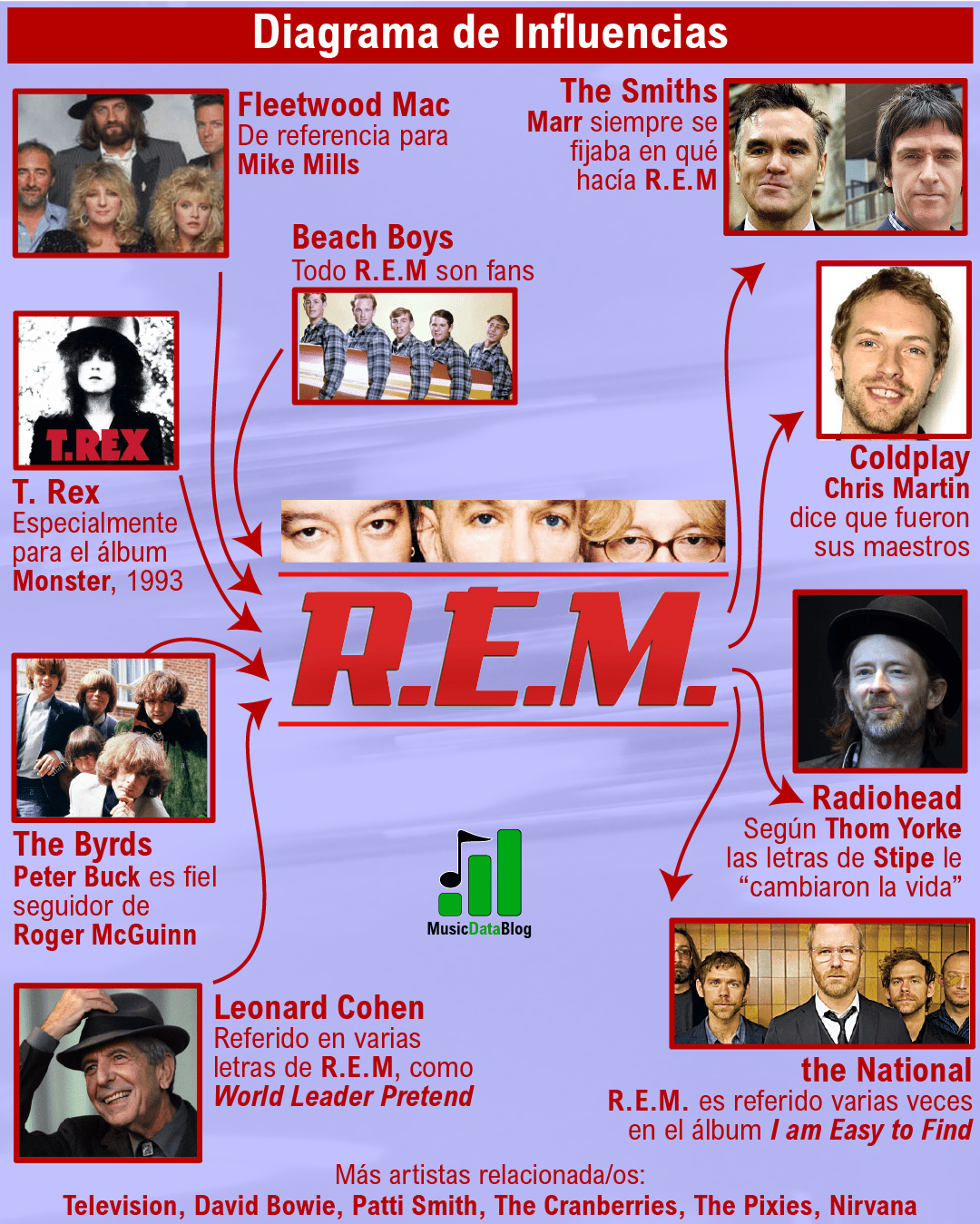 T. Rex: This band emerged in the sixties and was led by Marc Bolan, an important figure for the glam music movement. T. Rex is one of the most important references for R.E.M. guitarist Peter Buck. He especially remembers listening consistently to Bolan’s music while recording R.E.M.’s excellent album Monster (1993).

Fleetwood Mac: None other than the classic track Losing My Religion finds its inspiration in Fleetwood Mac. The song came from a mandolin riff written by Peter Buck. About the writing process, REM’s bassist Mike Mills explained he wrote the track’s iconic bassline while trying to emulate the bass lines of Fleetwood Mac, a band of which he is a big fan of. As he said in an interview: “What would John McVie do?”

The Byrds: Open and full guitar tones are one of the main influences on R.E.M’s sound. When talking about it, Peter Buck commented that his style is influenced by the pop and rock classic band The Byrds, from the sixties. In fact, Peter Buck’s predilection for the Rickenbacker 360 guitar comes straight from The Byrds guitarist Roger McGuinn.

Leonard Cohen: He is one of the favorite singers and songwriters of the band R.E.M. Michael Stipe commented that Leonard Cohen was an influence when he wrote the lyrics for the track World Leader Pretend, from the album Green, 1988. The smart and poetic lyrics of R.E.M.’s music are inspired by the work of the renowned Canadian singer-songwriter. Moreover, Leonard Cohen is included in the songwriting credits of the song Hope, from R.E.M.’s album UP (1997).

The Beach Boys: All R.E.M. members are fans of the band led by mastermind Brian Wilson. In addition to gospel and Motown, bassist Mike Mills explains that The Beach Boys are one of his biggest influences. Inspired by this classic surf rock band, the catchy tunes and especially the harmonized choruses between him and Michael Stipe are trademarks of the R.E.M. sound. In addition, the song At My Most Beautiful (also from the UP album) was inspired by Pet Sounds.

Although they are not extensively covered in this post, other bands and artists who influenced R.E.M. are Television, David Bowie, The Velvet Underground and Patti Smith.

The Smiths: The Smiths and R.E.M were two bands that pivoted Indie music in the eighties. The truth is that R.E.M. emerged in 1983, a little time before than The Smiths. Guitarist and one of The Smiths’ prominent figures, Johnny Marr, credited R.E.M. as an inspiration and a band “to which they should always watch.” So, according to Johnny Marr himself, it turns out that for him the band led by Michael Stipe was the light to follow.

Coldplay: The band’s track The Hardest Part is inspired by R.E.M. Apart from this, Coldplay singer Chris Martin has expressed his love for R, E.M. on several occasions, and also he has explained that they see them as some kind of role model that they always look up to.

Radiohead: Thom Yorke is a huge R.E.M. fan. According to the Radiohead singer, “Michael Stipe would sing about his flaws and weaknesses, saying it was okay to be weird. I was weird.” Yorke lists the R.E.M. album New Adventures in Hi-Fi (1997) as one of his favorites of all time.

the National: According to the band’s guitarist Bryce Dessner, his band wouldn’t exist without R.E.M. The musician credits them for putting alternative and indie rock on the map since the eighties. On his side, singer Matt Berninger indicated that the National’s album I am Easy to Find contains several references to R.E.M. With time, both bands became friends with each other. R.E.M. even invited the National to go on tour with them.

The Pixies: The Pixies were also instrumental in making alternative rock explode into the mainstream in the 1990s. Their lead singer and songwriter, Black Francis, has explained that the song Here Comes Your Man owes its title to Carnival of Sorts (Box Car) from R.E.M.’s debut album, Murmur (1983).

Other artists who were influenced by R.E.M. are Nirvana and The Cranberries.