Radiohead is one of the most influential British bands that emerged from alternative rock in the nineties. The graphic below shows some of the artists they are related to. 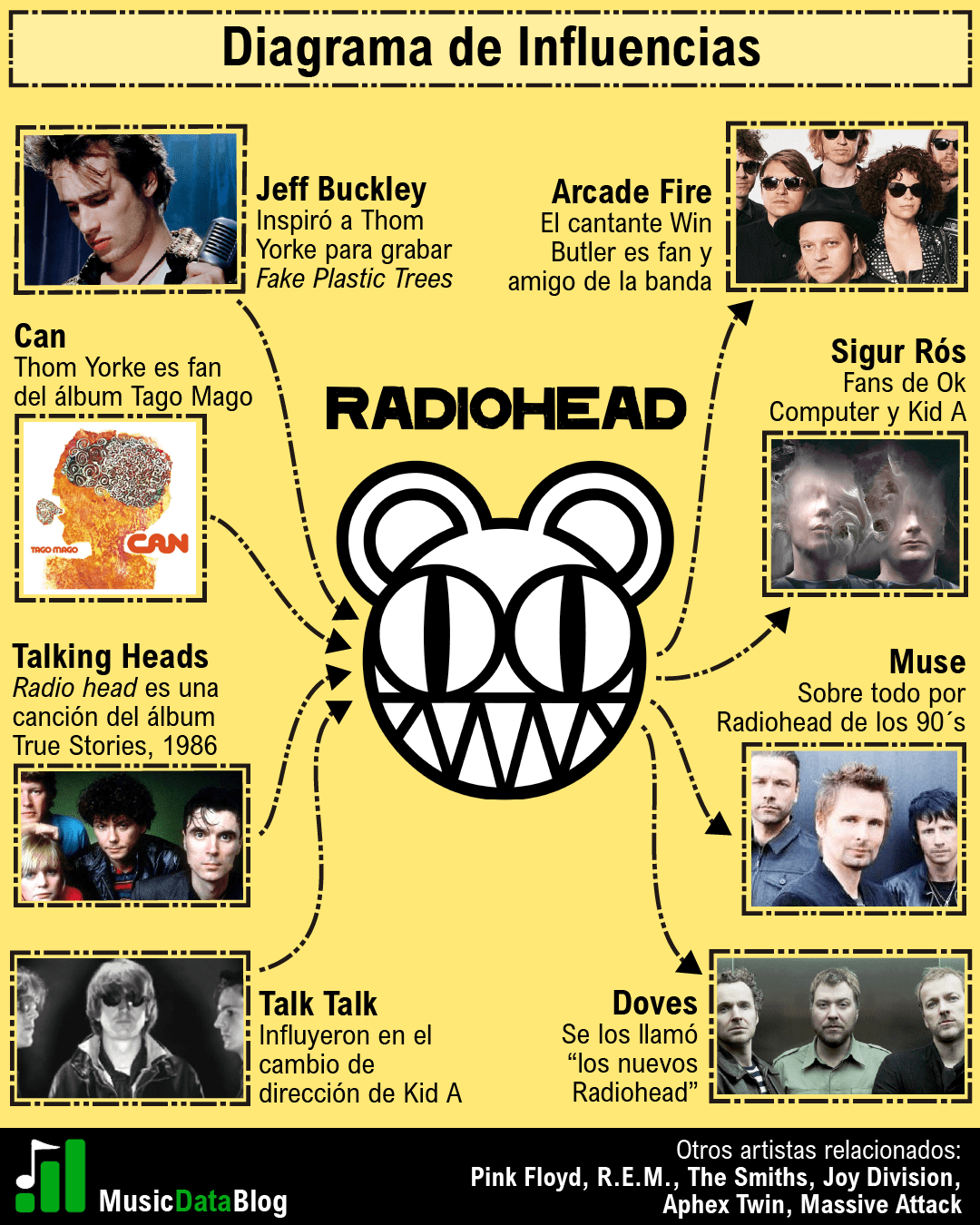 *This infographic has been created in collaboration with the music blog Pop Is Dead.

Radiohead started as an alternative rock band and later in their career changed their music style significantly. This is notable especially since album Kid A from 2000. Before that, in 1997 they released a masterpiece that defined the next generation of musicians: the widely popular OK Computer.

Which are Radiohead’s musical influences?

Their name, Radiohead, is taken from a song recorded by Talking Heads for their album True Stories (1986). Thom Yorke and his bandmates are big fans of David Byrne‘s group. Radiohead’s style shifts between songs, as well as their will to experiment with non-conventional rhythms, are inspired by this band.

Another influence that inspired Radiohead significantly is the mythical singer and guitarist Jeff Buckley. Known for his beautiful and dramatic version of Leonard Cohen’s classic song, Hallelujah, Buckley was a big influence on Thom Roker’s singing style. About this, Yorke says he was inspired by Jeff Buckley’s dramatic vocal delivery, notably while recording the song Fake Plastic Trees, from the band’s second album, The Bends (1995).

The album Kid A meant a defining change in Radiohead‘s career. This completely different approach to their own music was inspired by a similar move made by the band Talk Talk, which they are fans of. Talk Talk started as a Synth pop act and later evolved into a Post Rock project.

Krautrock and psychedelic rock pioneers Can, were a german band knowledged for having an experimental approach to their music. This band influenced Radiohead in terms of the direction that the band decided to go, moving away from a guitar-oriented style to another one that incorporated diverse electronic elements, such as rhythms sequencers, synthesizers, and loops.

Also related to this subject, we have another post about Pink Floyd’s influences, which of course includes Radiohead.

Radiohead has been cited as an influence by many 2000s artists. Two names widely associated with the band are Muse and Coldplay, whose albums often have been compared to Radiohead’s earliest work. So if you want to hear the roots of these two bands, perhaps you should check songs from Pablo Honey from 1993, which includes the hit Creep. Also, the previously mentioned The Bends and OK Computer are relevant as inspirations for Muse and Coldplay.

The British trio Doves are reminiscent of a Britpop sound but have incorporated experimental and progressive elements throughout their career. By the time they released their second album, the successful The Last Broadcast (2003), many critics had already called them “the New Radiohead“. The comparison between the two bands was usually in a positive way, which is not the case with Muse, which was more of a joke.

Sigur Rós is an islandic post-rock band that maintains some sort of mutual dialogue and influence with Radiohead. This can be heard especially on Sigur Rós‘s album Agaetis Byrjun (1999), after Radiohead‘s seminal OK Computer and before their change in style with Kid A.

Last but not least, we have Arcade Fire, who are friends with Radiohead and have played live with them on several occasions. Win Butler, Arcade Fire‘s lead singer and songwriter, is a big fan of Radiohead’s music and he has even written a review on their most recent album, A Moon Shaped Pool, which was released in 2016.