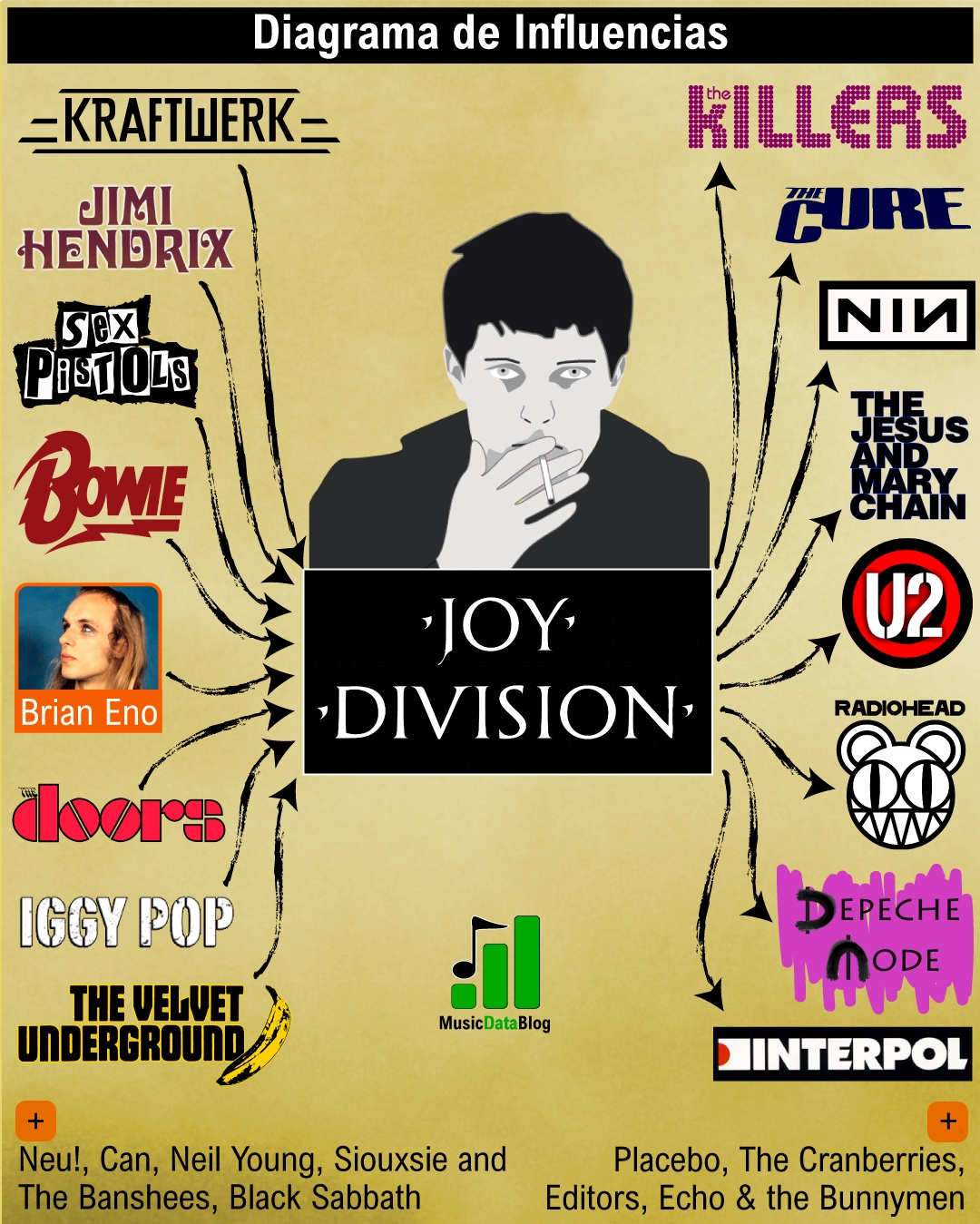 Joy Division’s multiple influences have had a profound impact on the subsequent decades of rock music. With a very short career, the band founded by Ian Curtis (vocals, guitar), Peter Hook (bass), Bernard Sumner (guitar) and Stephen Morris (drums), took elements of the punk scene, glam rock, German krautrock and psychedelic rock. The result can be heard to this day in entire subgenres -such as post-punk, gothic rock, alternative rock and indie.

Which were Joy Division’s influences?

We will summarize here the influences of Joy Division in terms of punk, krautrock, ambient and psychedelic rock:

To start, Peter Hook and Bernard Sumner decided to form a band as a result of attending a Sex Pistols concert. The fury and aggression of punk, which had been popularized previously by Iggy Pop and The Stooges, would become one of the engines of Joy Division songs like Disorder or Transmission. Also, the stage presence of Ian Curtis was inspired by Iggy Pop.

But the fast pace didn’t just come from punk rock. Pioneering electronic music groups such as Kraftwerk and Neu! also made use of accelerated rhythms (“motorik”) with technological additions that would set precedents for electronic music. It is worth noting that the album Trans Europe Express (1976) by Kraftwerk was broadcasted in venues before some Joy Division shows, by Ian Curtis request. Within the German avant-garde krautrock, the members of Joy Division have also mentioned the band Can, with their classic album Tago Mago (1971).

This experimental sound style was also inspired by David Bowie’s “Berlin trilogy” (1977 to 1979). In collaboration with Brian Eno, Bowie was influenced by the musical experiments of his German colleagues, especially the previously mentioned, Kraftwerk. From the second installment of this album trilogy, Low (1977), Joy Division took environmental and ethereal elements, in addition to their first name: Warsaw.

Joy Division’s psychedelic influences find their base mainly in Velvet Underground and especially, The Doors. In fact, Joy Division and Ian Curtis’ voice, were often compared to the band led by Jim Morrison. In some live shows, as a joke, Joy Division used to play The Doors’ classic song, The End.

Especially in the early days of Stephen Morris, drummer Maureen Tucker of The Velvet Underground inspired him with her playing style. Since German krautrock, the “motorik” drum beat had established itself as a compact and even stylistic signature style, ideal for post-punk and electronic rock.

On his side, guitarist Bernard Sumner said that Jimi Hendrix was the one who taught him to become more expressive with the guitar and to experiment more. Electric Ladyland is one of his favorite albums.

Following the death of Ian Curtis on May 18, 1980, the rest of Joy Division formed the successful electronic and new wave band: New Order. You can review their trajectory in detail here in the Joy Division and New Order timeline.

Other bands that influenced Joy Division are Black Sabbath, Neil Young and Siouxie and the Banshees.

Which artists were influenced by Joy Division

U2 and The Cure

Joy Division had a direct impact on fellow contemporary bands of the late 1970s, such as The Cure and U2. Both Robert Smith and Bono have repeatedly expressed their admiration for Curtis. The U2 singer especially remembered meeting Joy Division while they were recording Love Will Tear Us Apart, and how he was impressed with the song and with Curtis. Other bands related to the genre, such as The Jesus and Mary Chain and Echo and The Bunnymen, took at least part of their gloomy sound from Joy Division.

That post-punk movement had its “revival” in 2000, hand in hand with bands like Interpol, Bloc Party, Editors and Elefant. With clear vocal style influences, high-bpm beats and raucous guitars, these bands were capable of creating fast, direct songs as well as climactic and dark tunes. Taking Interpol as the main act of this era, their debut Turn on the Bright Lights did not escape comparisons with Joy Division’s work. It was all there: frenetic rhythms, a baritone voice with a camera, and dark musical climates. Among the popular bands of this era, we can also include The Killers, who have covered Shadowplay.

Another highly influential band that was inspired by Joy Division is Nine Inch Nails. Trent Reznor’s industrial rock project, took the furious elements of Ian Curtis’s band and translated them into another of the seminal influences of the 1990s and 2000s. To show their appreciation, Nine Inch Nails covered the Joy Division songs Digital, Dead Souls, and Atmosphere.

With tracks like She’s Lost Control, Joy Division added their influence on what would later evolve into electronic rock. Depeche Mode adapted many elements proposed by Joy Division to achieve an electronic, dark and gothic rock. This can be heard in Dave Gahan’s singing style and voice, and also in Martin Gore’s guitar sound. There is no doubt that Depeche Mode took inspiration from Joy Division to develop a style of their own and make history.

Among the many influences of Radiohead, a really important one is Joy Division. They have covered the song Ceremony and Thom Yorke on his own has done the same with the classic Love Will Tear us Apart. Related to this influence, drummer Spephen Morris said that if Joy Division had continued, they would have taken a similar direction as Radiohead. In fact, this doesn’t sound surprising at all.

Plenty of other bands influenced by Joy Division could be added here in this post. Such projects include The Cranberries, Therapy? and Placebo, just to name a few.