This is an influences infographic about one of the most important and famous bands of the nineties: Nirvana. Check out below a brief summary of these grunge heroes inspirations, back and forth: 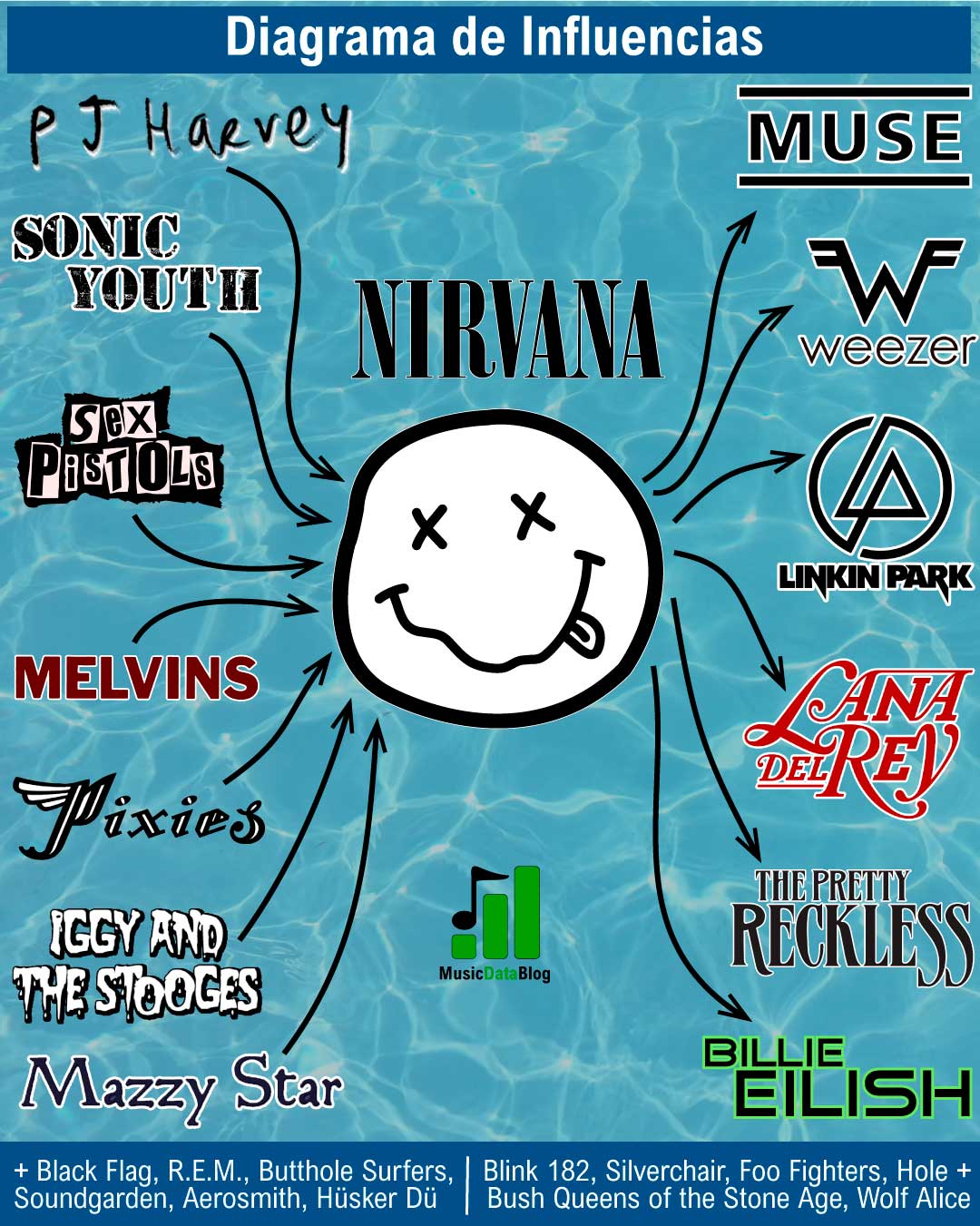 In addition to the graphic above, you can also check out our History Timeline about Nirvana here.

Which bands and artists influenced Nirvana?

Nirvana’s more direct influences go back to the alternative scene of the late 1980s. The first band we will mention from that strain will be Sonic Youth: they were friends, they helped Kurt Cobain and his band get their record deal and took them on tour. Also, it was bassist Krist Novoselic’s wish to sound like Kim Gordon’s, Thurston Moore & Co.

Another pioneering alternative band from that era is The Pixies. Kurt Cobain admitted that when he wrote Smells Like Teen Spirit he was trying to steal from them. As an additional fact, producer Steve Albini, responsible for recording Surfer Rosa from The Pixies (an album Cobain really liked) in 1988, was recruited by Nirvana to record In Utero (1993).

Specifically, the idea of Albini producing Nirvana’s third album came from P. J. Harvey’s Rid of Me (1993). Albini sent the record to Kurt as a “how could they sound” proposal. With its raw drum sound, the “roomy” vibe of Pixies’ Surfer Rosa and Polly Jean’s Rid of Me, forged the aesthetic imprint of that latest Nirvana studio album.

We could go on for hours, but here I will refer to two mentioned artists that Kurt Cobain listed on his favorite albums, as published by Kerrang: To follow this list, we will mention Raw Power: that fundamental album from 1973 for punk. Eventough the album failed to establish Iggy and The Stooges as a best-selling band, its musical influence on punk, heavy and alternative rock runs to this day.

On the quieter side of things, we have Mazzy Star. Hope Sandoval’s and David Roback’s debut album, She Hangs Brightly, is also on Kurt’s favorite album picks. Perhaps it is not something you would expect, but you can actually note the influence in some of the Nirvana’s quieter tracks, like Nevermind’s closer, Something in The Way, or In Utero’s track Dumb.

Want to know more? Just go and check out the rest of the albums on the list above!

One band that had great influences from Nirvana is Weezer. Their leader, Rivers Cuomo, created an “Encyclopedia of Pop” for himself, where he studied the composing methods, song structures, and melodies of various artists, and he extensively dedicated it to the Seattle band.

The late Linkin Park singer Chester Bennington mentioned Nirvana as one of the bands that motivated him to make music. Recalling a joint show by Pearl Jam, Red Hot Chili Peppers, and the band at hand here, he explained, “Nirvana helped me shape my point of view on music.”

The last (and most contemporary) example we’ll take: Billie Eilish was compared by David Grohl to Nirvana. Amid all the fuss over whether the comparison was excessive, pertinent, or totally wrong, the leader of the Foo Fighters had to come out to explain his sayings. Beyond that, Billie has admitted that she grew up listening to bands like Nirvana, which she admires.

Taylor Momsen’s heavy and hard rock band, The Pretty Reckless, owes a lot to Nirvana. From their raging guitar sound to their blue-mooded lyrics, the band created their music with the grunge scene in mind. Taylor Momsen has cited Nirvana as one of the bands she listened to the most, alongside Soundgarden.

A bit of a surprise here, but Kurt Cobain has also been an inspiration for Lizzy Grant, AKA Lana del Rey. The dream-pop singer has covered Nirvana’s classic track Heart-shaped Box and cited the band as a source of inspiration. This influence is not mainly in Lana del Rey’s music, but you can hear some of Cobain’s despair echoes in her lyrics. You can expand more on Lana del Rey’s musical influences here.

Muse’s approach to alternative rock music would not be possible without Nirvana. The band has mentioned their admiration for the band’s music and you can trace their inspiration, especially in their noisy first two records, Showbiz (1999) and Origin of Symmetry (2001).

The British band led by Gavin Rossdale was compared countless times with that of Kurt Cobain. There was even a well-known article in RollingStone magazine titled “NirvanaWannabes” as a complaint. The fact that they called in producer (oh!) Steve Albini to work on their second album, Razorblade Suitcase (1996), didn’t help.

Other artists influenced by Nirvana are Hole, Wolf Alice, Silverchair, Queens of the Stone Age, and Blink 182.