The following chart shows all of Massive Attack’s albums ranked according to the music reviews aggregator Album of the Year: 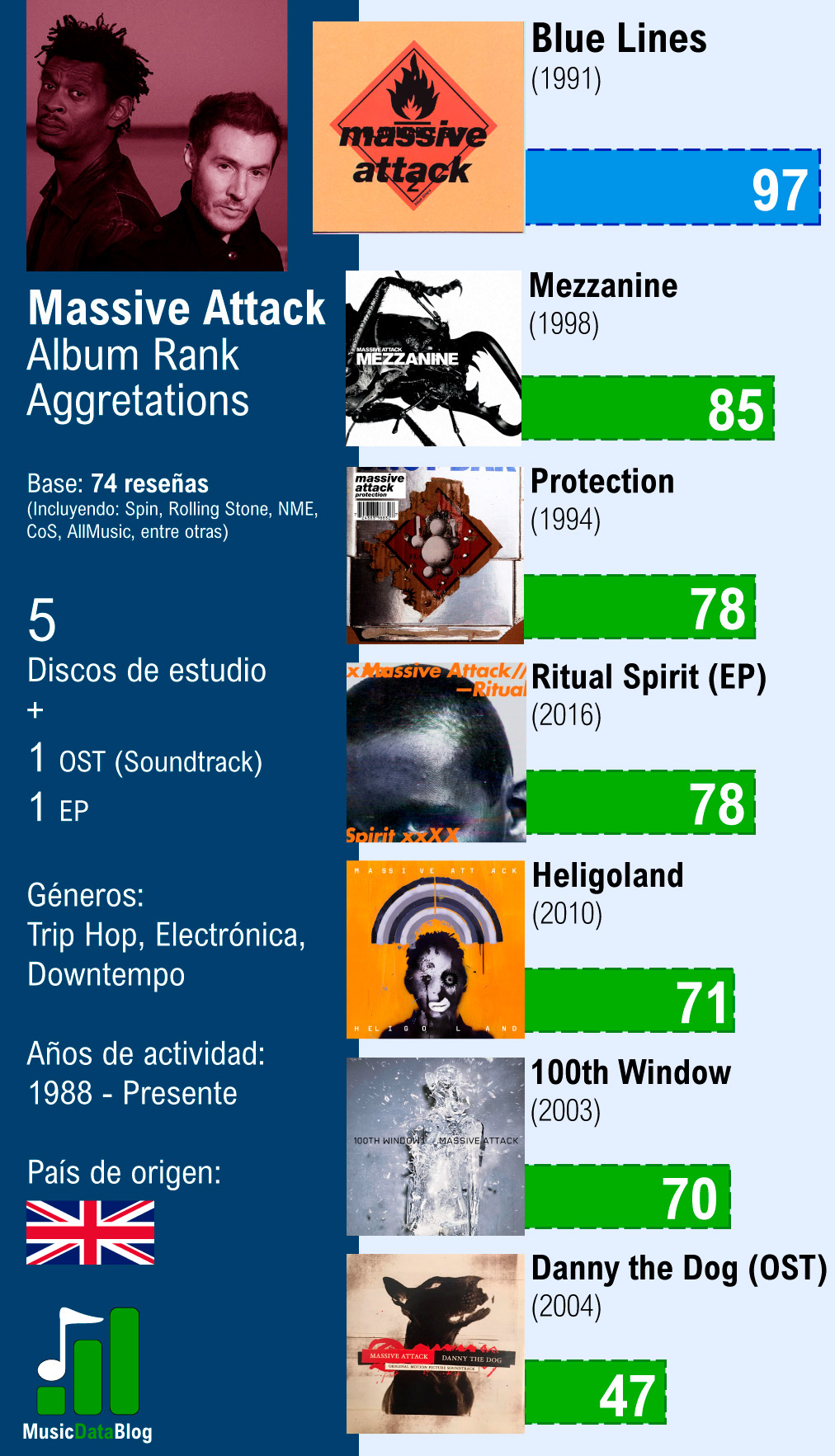 Massive Attack is a band formed in Bristol, England, that achieved success since their debut album Blue Lines, released in 1991. Their signature downtempo electronic tunes helped shape early nineties trip-hop, which became a huge trend at the time.

Which are Massive Attack’s Best Albums?

Massive Attack has a solid discography. Their first album is a favorite of both fans and critics alike. Easy to listen to and with an accessible sound, it contains some really great tracks like Daydreaming, Unfinished Sympathy, and Safe from Harm. This is especially recommended if you are seeking some chill-out and relaxing music from this English project.

In second place we have what I consider to be Massive Attack´s masterpiece: Mezzanine (1998). It is certainly less relaxing and a more complex piece of work than Blue Lines, but its mixture of jazz, rock, electronica, and house elements makes it an outstanding record. Every song sounds great and is placed in the right spot on the tracklist. Some highlights on this album are the songs Angel and Teardrop, perhaps their most well-known piece of music.

Protection is in a solid third place within Massive Attack’s discography. This album serves as a not-so-surprising but yet good follow-up to Massive Attack‘s debut. The title track, which features Everything But The Girl‘s lead singer Trazy Thorn, is definitely the most popular song from this release.

The EP Ritual Spirit is Massive Attack‘s most recent output. It was well received by critics and fans alike. Even though it is not a full-length LP, it is nice to hear that the British duo are still able to write and create some really good music.

Music reviews on 2010’s Heligoland were mostly positive, but did not completely praise the album. Nevertheless, this album contains one of Massive Attack‘s most popular songs: Paradise Circus. There are definitely some other great tunes on this record, like Pray for Rain and Girl I love you, which are my personal favorites from this era of the band. Heligoland was recorded in collaboration with Damon Albarn, lead singer for Blur and Gorillaz.

At the bottom of this ranking we find the only two albums that were recorded by band member Robert del Naja alone, without his bandmate Daddy G. 100th Window is a good album, I really dig it. Sinéad O’Connor provided vocals on some notable tracks like Prayer for England and What your Soul Sings. Having said this, it contains less friendly tracks and progressions, which makes 100th Window a less popular option in Massive Attack‘s discography.

At the bottom of this chart, we have Massive Attack‘s soundtrack for the 2004 movie Danny the Dog, which is not usually considered within the band’s studio production. It is an instrumental record that even though it does not include many tracks that will catch your attention, definitely has variety in its sound. This is not a stand-out Massive Attack album, but if you happen to bump into it, its price will be quite low, so it will be worth your money if you are a fan of the band.