Red Hot Chili Peppers have eleven studio albums -at least for now- and we are going to order them according to their popularity on Spotify. As you can see below, four out of the five studio albums that RHCP have recorded with guitarist John Frusciante are at the top of what is considered their best production, with Californication (1999) being their top 1: 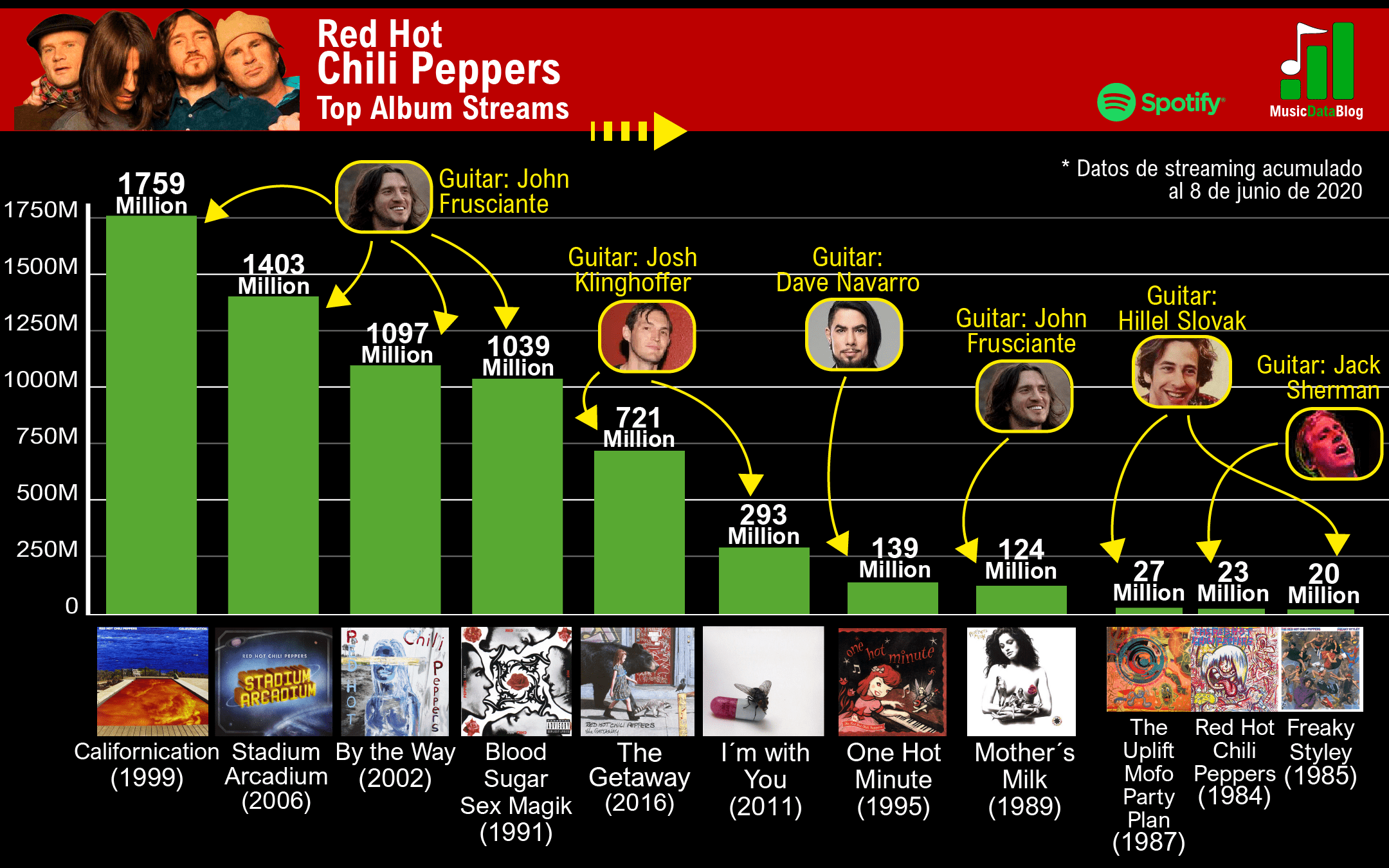 Red Hot Chili Peppers have a large discography. The creative John Frusciante is loved by all RCHP fans. To add some hype, at the end of 2019 it was announced that he was returning to the band: he came back to join Flea (bass), Anthony Kiedis (Vocals) and Chad Smith (drums). Out of the group was the Red Hot´s guitarist for their two most recent records, Josh Klinghoffer.

But let´s start figuring out why this Red Hot Chili Pepper´s chart looks like this.

By the end of the nineties decade the album Californication was a big boom. supported by hit singles as Scar Tissue, Californication, Otherside and Around the world, this is the Red Hot Chili Peppers best selling album to date. After disappointing fans and critics alike with their 1995´s One Hot Minute (their only record with guitar player Dave Navarro), they reinvented themselves with this wonderful effort. Californication was the album that brought again the Red Hot Chili Peppers to the spotlight as one of the world´s best rock and pop bands.

Not being a personal favourite of mine, Stadium Arcadium from 2006 is their second most successful album. Well, it is also a double album so you have more songs to stream. It also marks John Frusciante´s second departure from the band. In third place we have the sequel to Californication, By the Way (2002): eventhough it was not as successful, it was good enough to make it to top 3 in their popularity Spotify chart. It features some good hits such as By the Way, The Zephyr Song and Can´t Stop.

The fourth record in order  of popularity is also with Frusciante: It is specifically their first big album and it belongs to the first era of the Red Hot Chili Peppers with this guitarist, 1991´s Blood Sugar Sex Magik. This album has great nineties hits such as Suck my Kiss, Give it Away, Breaking the Girl and the band´s most streamed song: Under the Bridge.

So that shows that most of Frusciante´s work with the band is their most popular.

Just in fifth and sixth place both of the albums recorded with guitarist Josh Klinghoffer appear: The Getaway from 2016 and I´m With You from 2011. They are solid efforts, surely this must be said. Klinghoffer had the hard task of replacing the band´s most loved guitar player, the previously mentioned John Frusciante. He did it with his own style, while being able to blend in with the Red Hot Chili Pepper´s sound properly. From this era some well known songs, like Dark Necesities, Sick Love and Go Robot, that were published as singles.

Now here is something that I never understood: the forementioned One Hot Minute lands in the seventh spot. The “heavier” Red Hot Chili Peppers generated hits such as Aeroplane, My Friends, One Big Mob and Warped but people seem to have never cared as much for this wonderful era. Surely guitarist Dave Navarro was no John Frusciante: their styles are significantly different, with the first being quite full and hard, more technical and precise. Frusciante´s style has always been creative, softer at some point and has proven to be a hit or miss live. Never the less, Red Hot Chili Peppers big fans are not fond of Dave Navarro´s era.

At the end of the chart we can find whatever the Red Hot Chili Peppers did in the eighties, even with Frusciante on board. All that is at the bottom of the list. Previously to beeing a big stadium band, their less commercial albums are not much remembered in Spotify times. The work of original guitar player Hillel Slovak (April 13 1962-June 25 1988) is not quite as popular. At that time they were less professional, more underground sounding with clear influence from their hardcore, punk and funk roots. And, truth to be told, that sound was not mainstream at the time and it seems it is not going to be mainstream in 2020 either.

Here que can see the most popular song of the Red Hot Chili Peppers:

We use cookies to improve your browsing experience in our web site. By continuing to browse the site, you are agreeing to our Privacy PolicyAccept!